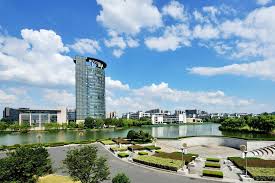 A world-class university (with three essential qualities – comprehensive, research-intensive, and innovative) that will transform lives and improve China and the world

To nurture future leaders and useful citizens with a global vision and social responsibility;

To translate knowledge and creativity to benefit the local and global communities. The University logo consists of two components: the round emblem and the wordmark.

The round emblem features a flying eagle in the center, a ZJU mascot known as the “qiushi eagle”. The eagle symbolizes the University’s tradition of seeking truth and pursuing innovation, which has been inherited and further developed by the ZJU community.

Normally, the wordmark must always appear in conjunction with the emblem. If desired, the emblem may be used alone (for instance, when space is limited).

In the first article, HU’s team found that ketamine blocks bursting activity in the lateral habenula (LHb), an anti-reward center in the brain, to rapidly relieve depression. They discovered that in various animal models of depression, the intrinsic burst firing activity of LHb neurons is significantly increased. Burst firing, a particular spike pattern with clusters of high-frequency spikes, provides a robust form of information coding and a stronger output from LHb to inhibit the reward-related dopaminergic and serotonergic centers.

The team discovered that LHb burst firing strongly depends on NMDAR, a major subtype of excitatory glutamate receptors within the brain. Ketamine, as a NMDAR antagonist, completely eliminates LHb bursting in vitro and reduces bursting of depressive-like animals to the level of naïve control animals in vivo.

In the second research article, the team further identified the molecular mechanism by which neuron-glia interaction at the LHb regulates burst firing in depression. Through an unbiased, mass spectrometry-based, quantitative proteomic screening, they identified an inward-rectifying potassium channel, Kir4.1, which is upregulated in depression. Kir4.1 is exclusively expressed in the astrocytes, one type of glia cells, in the LHb.

The results point to the important role of a glia-specific ion channel in the regulation of neuronal firing pattern, and provide compelling evidence for Kir4.1 being a powerful molecular determinant of depression.

The newly discovered structure-function mechanism at the glial-neural interface in burst regulation may enrich our understanding of the basic cell biology of how glia regulates neural activity in physiological and pathological states.

Together, they provide a new framework for understanding the molecular, cellular and circuit mechanism of depression and shed important light on developing new rapid-acting antidepressants.